It is thought that pre-Christian British tattooed themselves with geometric designs like the Celts and many other ancient Europeans, and that the practice died out with Christianity. In more recent times it was introduced to Britain again through sailors’ contact with other world cultures, especially Polynesia, and swept from the lower classes up into the aristocracy very rapidly. (see: Wikipedia: tattoo history) 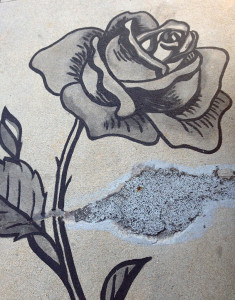 The designs here are the Tudor Rose, which was the emblem of the English royal family during the time of exploration, and a more realistic rose. The British had a long artistic and literary history, somewhat associated with herbalism, of ascribing various meanings to flowers and plants. Roses stood for love: A white rose was spiritual love, yellow stood for friendship, and red for romantic love. The rose also came to symbolize England. The realistic rose used here in this particular shape, is also very close to the symbol for the English rugby team.