Boston was established as a seaport, and throughout its history was a hub for immigration and trade, fishing, whaling, and the Navy. During the American Revolution, privateers and blockade runners sailed from Long Wharf. (Read More) 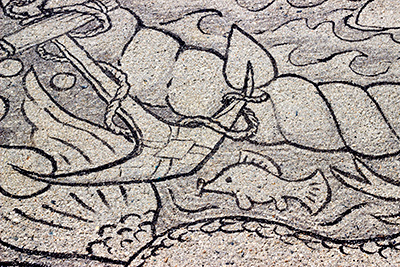 Groundfishing, the catching of fishes that swim in close proximity to the bottom, was the first colonial industry in America. Atlantic cod, halibut, ocean perch, Haddock and Yellowtail Flounder once fed millions of Americans. (Read More)

Once, great fleets of vessels sailed from Gloucester and Boston to the eastern- most reaches of North America — the Grand Banks of Newfoundland. Catches of salt cod supported nearly 400 schooners in each of these ports, and a multitude of shore-side businesses including salt mining, ice harvesting in fresh-water ponds, and a boat building industry that made the shipyards on the Essex River among the busiest and best known in the world. (Read More)

The schooner fleets were replaced by steam-powered trawlers around the turn of the century, and stocks began to noticeably decline by around 1930, though the fishing industry lived on.

New England Whaling:
From about 1650-about 1900, New Englanders ventured from Greenland and the North Atlantic around Cape Horn to the Pacific in search of whales for the lucrative whale oil industry.

Who were the sailors?
Some sailors on whaling vessels were seeking their fortune and hoping to become captains someday, others wanted adventure, others were just looking for a chance to change their lives. Of those sailing from New England many sailors were Native Americans. At times the whole crew, with the exception of the captain, might be natives.[4] Many sailors on whaling voyages were also African American, especially in the 1800s. The Industry had an all-black crew and sailed in 1822. The whaling business was more tolerant of African Americans then other professions, and afforded them opportunities to rise and become successful, even as far as becoming captains.*
(*Scammon, Charles (1874). The Marine Mammals of the North-western Coast of North America: Together with an Account of the American Whale-fishery. Dover. ISBN_0-486-21976-3. p.204. (Via Wikipedia: http://en.wikipedia.org/wiki/Whaling_in_the_United_States)

“By 1660, shipbuilding had become a leading industry in the towns of Newburyport, Ipswich, Gloucester, Salem and Boston. A wealthy class of merchants developed about the same time, supported by the steady growth of Massachusetts shipping. Colonial merchants were more than shopkeepers or commission dealers. They bought and sold, at home and abroad, on their own account and often handled ‘private adventures’ on the side. They owned or chartered vessels that carried desired goods. At busy ports, these entrepreneurs and businessmen built wharves, which provided a safe place for their crew to unload goods destined for local markets or to load cargo onto ships bound for distant ports. In addition, they constructed stores, warehouses and fashionable homes, leaving their mark on the present-day landscape.” (Read More)

Triangle Trade:
Though the largest traffic in slaves operated out of the Southern states and Brazil, New England merchants also took part in a trade route that brought rum and manufactured goods (cloth, guns, metal items) to West Africa, slaves to the Caribbean, and sugar (grown there on plantations) to New England (where they manufactured more rum). This was in practice from the late 1600’s till the early 1800’s. (Read More). We need to be aware that New England also profited from having this market for manufactured goods.

Other triangular trades:
The term “triangular trade” also refers to a variety of other trades. A trade pattern which evolved before the American Revolutionary War between Great Britain, the colonies of British North America, and British colonies in the Caribbean. This typically involved exporting raw resources such as fish (especially salt cod) or agricultural produce from British North American colonies to feed slaves and planters in the West Indies (also lumber); sugar and molasses from the Caribbean; and various manufactured commodities from Great Britain.[9] The shipment of Newfoundland salt cod and corn from Boston, Massachusetts in British vessels to southern Europe.[10] This also included the shipment of wine and olive oil to Britain. A new “sugar triangle” developed in the 1820s and 1830s whereby American ships took local produce to Cuba, then brought sugar or coffee from Cuba to the Baltic coast (Russian Empire and Sweden), then bar iron and hemp back to New England.